Travel Via Art: Been There Without Being There

Travel Via Art: Been There Without Being There 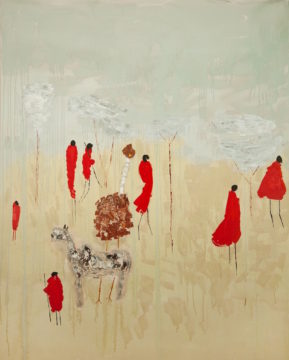 When a gallery opened up across the street from J Klein Gallery, Sisso Tribal Art Gallery, Jim walked over to introduce himself like any good neighbor should.

During his time at the neighboring gallery, Jim learned the gallery owners were from Africa. Jim shared with them about his own series of paintings, Africa. “The owners asked if I had visited, and I told them I had not. He told me I must have, or at least my heart had.”

Eight out of nine pieces in the Africa series have since found homes. One painting in particular titled “AFRICA” (now sold) was the all-time, most popular piece during its time hanging in J Klein Gallery. At 100 inches tall and 80 inches wide, the massive artwork was often the subject of sustained admiration.

Jim recalled one visit about two years ago by a gentleman who was particularly enraptured by the painting. “This guy stared at it for at least twenty minutes,” Jim recalled. Jim asked the art lover about it after, never having seen such intense focus on one of his paintings.

The man asked Jim if he had grown up “in the bush”, a term for the wild bushland of Africa. Jim truthfully told him he had not. The man was shocked. “No, you must have lived in the bush. This painting… I was born and raised in the bush and this painting has the feel of the bush!” Jim’s painting brought the visitor back to the wild.

Having grown up in an agriculture background, Jim has many pieces focused on agriculture. “Farmers aren’t generally artsy people but they connect with my art,” Jim explained. “When a farmer sees my paintings, they know intrinsically that I have experienced what they have. You can’t explain it, but we have shared the same experience.”

Jim has found especially on the livestock pieces others connect deeply. “I knew livestock better than people after spending so much of my life around them. People that grew up the same way identify immediately with those pieces.”

Despite not growing up on the very same farm, others are able to identify with Jim’s experience. 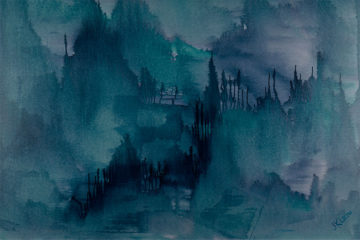 Another painting that receives international admiration is “MISTY MOUNTAINS”. Jim has never traveled to Japan, but he finds visitors from Japan focus intently on this particular artwork. “Growing up, my family was very close with a Japanese family. They were like a second home to mine and their culture was definitely part of my upbringing.”

Who needs a plane ticket when you’ve got a painting?