The Tipping Point | Behind the Canvas with Jim Klein

The Tipping Point | Behind the Canvas with Jim Klein 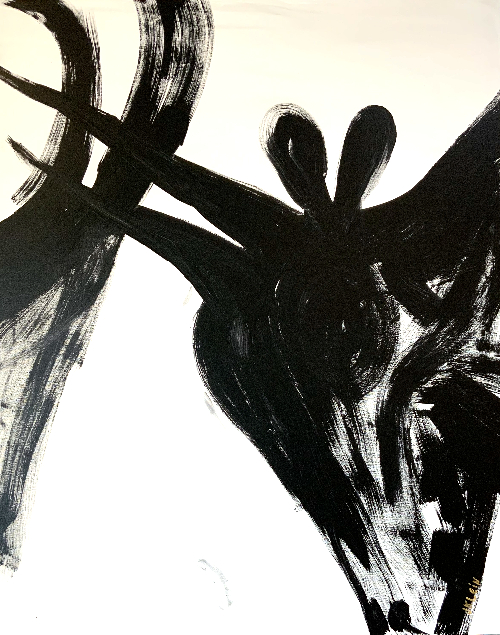 “I can tell a good cowboy by the way he approaches a cow.”
– Henry Green, English author

Rewind to 1974; before contemporary artist Jim Klein professionally set brush to canvas, he was working as a farmhand on a small feedlot in Colorado. It is this return to his agricultural background where he shares a story with a particularly feisty heiferette named Gertrude.

What were your responsibilities at the feedlot?
Jim: Aside from feeding and general care, I was charged with taking care of the sick cattle. This feedlot had a specific quarantine area where sick animals were held. It was a square pen with a 90-degree angle entry that led to an alleyway. This led the cows through a chute into another area where we could doctor them. This is where Gertrude, the heiferette star of our story, was frequently held.

For those of us not in the agricultural know, what is a heiferette?
Jim: A heiferette is a cow that has calved once, and then is fed for slaughter.

Jim: A lady from San Francisco said I “understand the soul of a cow” after viewing the cow series at the Gallery. I have a deep understanding of cows. Growing up I was surrounded by cows and Gertrude was a unique cow.

A chronically ill cow with long, sharp, and pointed horns, Gertrude was notorious for being a little crazy. She would get into this mood where her eyes would glaze over and she would stare with a piercing intensity at anyone nearby. It was impossible to read.

She also had the habit of charging randomly when anyone got into the sick pen with her. Gertrude seemed to have this internal clock that when she had her fill with whatever human was near and her tipping point was reached, she would charge. No one knew when that point was. This created an interesting situation whenever Gertrude needed to be treated; you had to be quick on your feet to direct her from the sick pen into the chute for her treatments… or even just to avoid her horns and hooves. 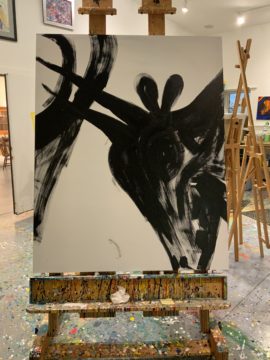 What happened with Gertrude that left such an impression?

Jim: I have been wanting to capture and share this experience for some time now, and I’m very happy with how it turned out.

One day, it was my turn to treat her and Gertrude was waiting for me in the sick pen. When I climbed in, she performed her usual routine and stared at me with that signature glazed look, unmoving. I needed to get Gertrude through the chute for her treatment, so I hatched a plan. As I watched her observing me, I thought to myself, “I’m gonna stand in the opening to the alleyway and taunt her! Then when she charges, I’ll step to the side like a matador and she’ll go right through the chute.“

I positioned myself in the chute entrance and began my show. I waved my arms all around and called and taunted. Gertrude watched but didn’t move. After a few minutes of unsuccessful attempts to get the heiferette to charge, I paused. Gertrude stared. I decided this wasn’t working and would need a new method to encourage her through the chute.

Of course, at the same nanosecond that the thought crossed my mind, all 1,000 pounds of her charged. My matador plan evaporating instantly, I sprinted for the fenceline. Gertrude was FAST. I could hear her snorts, her pounding hooves, and was all too aware of the pointed tips of her horns nearly connecting with the seat of my pants. The fence was impossibly far. Hooves, snorts, horns…

Somehow, the fence was in reach. I cleared the five-foot-tall rails without even grazing it, landing safely in the dirt on the other side and away from Gertrude’s sharp horns and stomping hooves.

Two of my fellow farmhands bore witnesses; I had never seen either of them laugh so hard.

I realized there was a lesson in my experience with Gertrude and it’s this: there’s a tipping point in life, so you better get moving.