“What would life be if we had no courage to attempt anything?” ~ Vincent Van Gogh

Vincent Willem Van Gogh was a Dutch post-impressionist painter who is among the most influential figures in the history of Western art. During the decade of his highest activity two years before his death, he created nearly 2,100 artworks including around 860 oil paintings. Tragically, his work did not find him commercial success during his life. Van Gogh committed suicide at age 37 after years of mental illness, depression and poverty on July 29, 1890.

In 2012, the Denver Art Museum was chosen to host Becoming Van Gogh, an incredible exhibit showcasing Vincent Van Gogh’s journey through more than 70 paintings and drawings on loan from private and public collections around the world.

Contemporary artist Jim Klein had the unique opportunity to walk the Becoming Van Gogh exhibit “after hours” and shared his experience touring a lifetime’s worth of work from one of history’s most prolific artists.

Jim: The Becoming Van Gogh exhibit was extremely popular. Folks who had attended kept expressing how amazing the displays were, the vast collection of artwork, so I concluded I really needed to see such a rare event.

By this time, the Denver Art Museum was allowing the exhibit to be toured almost 24/7 because it was such a hit. Even with extended and additional tours, we were unable to attend until the exhibit was nearly closed!

At the last minute, I was able to acquire tickets for a 3 a.m. tour. After visiting with an acquaintance who knew a benefactor of the Art Museum, they were able to retrieve tickets for a time slot on the Saturday morning after the exhibit had “officially” ended.

My daughter Sarah attended with me, and when we arrived we were surprised to find only 12 people in the tour group. I thought to myself, “Wow this is really unusual.” The exhibit had been sold out nearly the entire run, how could this tour group be so small? After some light talk with the host, I realized we had all received special invitations.

What did you experience at the exhibit?

Jim: The Denver Art Museum outdid themselves. It was incredible. The exhibit followed his life and artistic timeline showing how his work evolved over the course of his life. Here we were able to view his early works (which I was surprised to find was very geometrical), to his more well-known paintings. 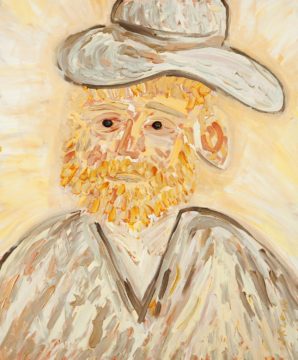 After a guided tour, we were allowed to wander through the exhibit on our own. Here I was able to study the paintings up close. That’s where I really felt time disappear, just allowing myself to dive into the brushwork, the colors, the scenes.

Some time later, I looked up and found that I was alone. A few security team members were there, and told me it was fine to keep wandering. Van Gogh and I were left alone. Feeling extremely fortunate, I wondered how many people had the opportunity to walk around these rare works of art by themselves?

As I revisited the various works, I felt that I was experiencing his feelings and emotions. I had empathy for his trials and struggles he encountered. It was as though we developed a very personal relationship through this time. It was quite an experience.

Jim: There is a Van Gogh, Beethoven, and Emily Dickinson inside everyone.