Art and Legends in the Outback | One-on-One

Art and Legends in the Outback | One-on-One

“In some odd way that you don’t understand and can’t begin to articulate your feelings and acquaintance with it- a familiarity on an unfamiliar level. Somewhere in the deep sediment of your being some long-dormant fragment of primordial memory, some little severed tail of DNA, has twitched or stirred. It is a motion much too faint to be understood or interpreted, but somehow you feel certain that this large, brooding, hypnotic presence has an importance to you at a species level- perhaps even at a sort of tadpole level- and that in some way your visit here is more than happenstance.”
― Bill Bryson on Ayers Rock, In a Sunburned Country

Back in 1997, Jim Klein was invited to visit the Land Down Under by an Australian company to discuss satellite technology developed for agriculture applications.

Jim had always been very intrigued with Australia, so when he had a layover in Alice Springs he took the opportunity to explore. He was able to visit many amazing different locations from Melbourne to Canes, the Great Barrier Reef, Perth, and the Outback; including the UNESCO World Heritage Site Uluru, also known as Ayers Rock.

Uluru is a large sandstone rock formation in the Northern Territory in Australia. Reaching 2,831 feet in elevation, Uluru is considered sacred to the Pitjantjatjara, the Aboriginal people of the area. The land surrounding the formation is home to an abundance of springs, waterholes, rock caves and ancient paintings. 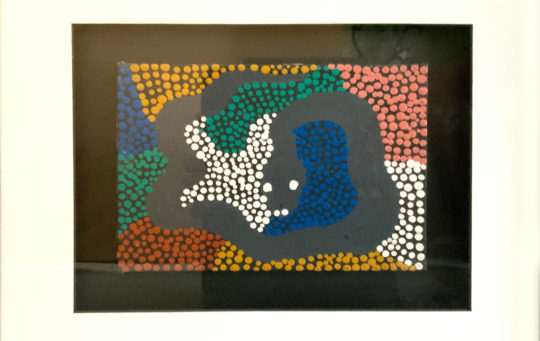 During his visit in the Outback, Jim met an Aboriginal woman painting on canvas outside the Cultural Centre at Uluru-Kata Tjuta National Park. She was a well-known and loved artist and elder in the area and had just completed a piece of art, shown above.

The art depicts a serpent, a common motif in Aboriginal art. The Rainbow Serpent or Rainbow Snake is an immortal being in Aboriginal Mythology. The connection between snake and rainbow suggests the cycle of the seasons and the significance of them and water in human life. When a rainbow is seen in the sky, legends explain this as the Rainbow Serpent traveling from one waterhole to another. There are countless names and stories connected with the serpent. They all illustrate the importance and dominance of its presence within Aboriginal traditions. It is said to be the giver of life, due to its connection to water; however, it can also be a destructive force if enraged.

Jim was fortunate to walk with some locals and experience some of these sacred places. His group spent some time observing the many formations and local wildlife and Jim was able to learn about the various myths and legends surrounding Uluru.

Has this trip affected how you view the world?
Jim: This really opened my eyes to how nature- in its own form- inspires these deeply-tied myths and stories to the humans who experience them; this experience has a lot to do with how I study natural formations now. For example, when I paint a wash on canvas, I ask myself: what are the stories behind this wash, what’s the story about this mountain or these hills? What caused these to form?

There’s a story in everything, it just depends on how we look at it.

Have you noticed your works pulling inspiration from this experience?
Jim: Everything we witness- from the first day we open our eyes to today seven decades later- gets stored in your visual library. Our brains are the most powerful mega computers available. When I first started to paint, I noticed these visuals emerging from years ago from my subconscious, images I hadn’t seen for a very long time. Everything is recorded.

I do think that’s an advantage of pursuing art at a later age because I now have a huge storehouse of visual data. We don’t realize it’s there or when something will surface t until there’s that moment, “Oh my gosh, I remember that!”

The colors, the feel, the emotion, and the structure of everything you see all tie together. It makes for a very interesting time!

Discover your next piece of original artwork by Jim Klein in our online gallery! Click here to explore.